Start a Wiki
"They've been hiding here: lost in the past... looking for answers."

3 and 4 are twin stitchpunks that were created from garden gloves. They wear dark blue hoods over their faces and have light blue bodies with dark brown and beige stripes. They don't appear to have any fastening. Their numbers are inked onto their chests rather than their backs - 3's is on the right side of their chest while 4's is on the left. Their genders are unknown.

there are no defining characteristics appearance-wise for 3 or 4.

In the movie, the twins seem to be mute. The only way they communicate is through flickers that they send to each other, exchanging information. If they wanted to show their fellow stitchpunks something important their eyes become projectors. They also are quite attached to 7.

Their first debut in the movie is in the library. 2 has been killed and 9 has awakened Brain. 5, 9 and 7 want to know what they have just awakened. The twins show them a newspaper article. 4 then plays one of the news reels about man and technology becoming enemies.

They appear again after the church burns down and the rest of the stitchpunks had to spend time at the library. They and 6 check out the drawing of the talisman. Then are seen later when 8 and 7 had been captured by the seamstress.

The twins find a phonograph and played Somewhere Over the Rainbow, while the rest of the surviving stitchpunks relax and have a little fun. But Brain had survived and killed 5 and 6.

They load a gun of some sorts for 1 and 7 to aim and shoot the living robot. During the process, 1 gets killed.

During the burial scene for the dead stitchpunks, the twins say their goodbyes to their friends. After the deceased stitchpunks had risen into the sky, it starts to rain, which starts new life. The twins, who had never seen rain before seemed to be interested, as we see one of them reaching their hands out in the air, feeling the raindrops.

Their relationships with the other stitchpunks Edit

1- The twins seem neutral towards 1.

2- Not a lot is known since 2 dies before he meets the twins.

5- They seemed to be good friends, since 5 seemed surprised to see them both alive and well in the library after so long.

6- They also seemed to be good friends since they act friendly towards each other. The twins felt depressed after 6 dies.

7- She acts like a mother towards them, constantly caring for the twins.

8- The twins seemed to be afraid of 8, possibly because of his large build and the fact that he is constantly carrying a weapon.

9- They see 9 as a close friend, He acts like a father towards them.

concept art of the twins 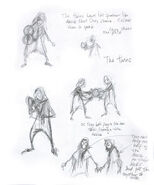 twins concept art
Add a photo to this gallery
Retrieved from "https://nine.fandom.com/wiki/3_%26_4?oldid=7701"
Community content is available under CC-BY-SA unless otherwise noted.